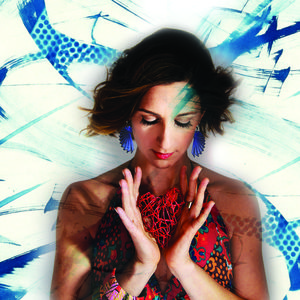 Eleanor Dubinsky has found the tender edge where jazz, world, and pop sensibilities meet emotionally forthright songwriting. Composing in English, French and Spanish, the indie songstress is noted for her soothing, sultry vocals, enlivened by Latin, Brazilian, American and West African rhythms. Accolades include being named “Best Up ...

and Coming Francophone Singer in NYC” by French Culture Guides and winning the Sennheiser recording contest at the 2012 ASCAP EXPO with her song “Wait For You” (included on her upcoming release). Eleanor’s music has been featured on MTV, Lifetime and Animal Planet, ads for American Express, radio stations throughout Mexico, and NPR’s Alt Latino. She has made many festival appearances including Lincoln Center's Boro Linc: La Casita, the 4 + 4 Days In Motion festival in Prague, The Philadelphia International Festival For The Arts at the Kimmel Center, the Puerto Morelos Music Festival (Mexico), and concerts in Costa Rica, Portugal, France, Mexico, Cape Verde and Senegal. Performing regularly in New York City and the surrounding area, Dubinsky also teaches songwriting and performs for children and adults receiving cancer treatment at NY Presbyterian Hospital. Dubinsky has two releases to date, Touch The Sky (2011) and Listen To The Music (2012) and has collaborated on side projects including Sugar On My Mind, a favorite co-write with Erik Lawrence (Levon Helm, Amy Helm, Butler Bernstein and the Hot 9, The Levin Brothers) and Charlie Burnham (Cassandra Wilson, Martha Redbone). Her third CD Soft Spot Of My Heart comes out on March 30, 2018.

Dubinsky grew up in St. Louis, Missouri, studying classical cello from the age of three, singing as the vocalist in her high school jazz band and immersed in musical theater and contemporary dance. A mid-sized mid-western city with a rich history of civil rights activism and pronounced economic disparity across communities, St. Louis was an influential breeding ground for Dubinsky’s sense of social justice. Discovering as a child that her musical ear translated to an affinity for learning foreign languages, Dubinsky’s cultural and linguistic fluency afforded her the opportunity to travel to France repeatedly in cultural exchanges and academic programs. She later transferred these skills to learning Czech while studying in Prague, Spanish while traveling to Cuba (to study dance and percussion) and Mexico, and Portuguese while researching and touring in Portugal and Cape Verde: “I’ve always been able to absorb languages easily and to feel at home in the warmth of ‘foreign’ environments - it’s like you tap into “I’m a person, you’re a person” instead of “I’m from here, you’re from there…” and then it’s all us - just people in a room, hopefully being able to communicate."

Dubinsky's linguistic facility and substantial time abroad informed her belief in the importance of art as a form of social action and a way to bridge communities. Before focusing primarily on music, Eleanor spent a decade dancing in the highly collaborative and inquisitive New York City downtown dance scene, creating her own pieces and assisting award-winning performance artist Ann Carlson, known for her boundary-pushing site-specific performance installations.

In 2012, Dubinsky began following a thread she found listening to Portuguese/Cape Verdean artist Sara Tavares. Tavares’ music was like a call she had to answer, feeling such a natural compatibility with her sound that she had to know more about her and more about the roots of the music she was making. “I loved the groove and rhythm of the music I was hearing - it was soft and strong at the same time, super groovy, danceable and inviting…It’s like my natural sound was somewhere outside my body and I had to go out and find it, and learn more about it so I could bring it into my own music.”

This thread took her to Portugal and Cape Verde, launching a five-year period of research and exploration that has broadened her influences, skills and musical community, ultimately leading to Dubinsky’s aforementioned current and third extended recording project Soft Spot Of My Heart, a globally savvy collection of tracks that foreground her emotional honesty and voice while fully embracing the musical colors and influences of a diverse group of collaborators from Portugal, NYC, Cape Verde and Brazil.

In the end, it was the people. Singer, polyglot songwriter, and multi-instrumentalist Eleanor Dubinsky was drawn to Lisbon after years of travel and exploration, but the music she made there surprised her.

“It’s about artists, not about music that happens to be from particular countries. I had some preconceptions going into this album, but I learned that there are many more layers to these worlds than I imagined. it’s infinite what I can learn. It expands beyond a particular genre. It’s about a collaborative work from a group of artists with something to offer that spans genres and geographies.”

On Soft Spot of My Heart (release: March 30, 2018), Dubinsky leans into the vulnerabilities and delicate moments we all face in relationship to one another, drawing strength and inspiration from musical friendships she forged in Lisbon and New York. Spurred by the “awakened heart” approach of Tibetan Buddhist teacher Pema Chodron, Dubinsky treads lightly through the thickets of affection and attachment, discovering a grace in the elegant melodies and Lus-African sway her collaborators bring to the table.

“The soft spot is about holding with deep compassion all the stuff we run away from. This helps us love others better. If this process feels painful, I have found I need to grow my brain to contain more, more of others’ perspectives and stories and needs. I try to carry this understanding into my songwriting,” explains Dubinsky. “You have to continuously expand your understanding of what a human being can do, of what they can be.”

By finding a artful dialog with musicians from New York, Brazil, Cape Verde, and Portugal, Dubinsky urges all of us to embrace that sweet spot and hold the world there.

Dubinsky grew up in St. Louis, getting an early start in classical cello and jazz music. Her surroundings sparked an ongoing interest in the broader world, especially as she traveled solo as a young woman, spending significant time in France, the Czech Republic, Argentina and Mexico, and mastering French and Spanish. Her curiosity deepened the more she explored, and that exploratory spirit was channelled as she plunged into the contemporary dance scene as a young transplant to New York.

After ten years in the “downtown dance” scene, music still called to her. Standing at the crossroads of embodied rhythm, social commentary and engagement, Dubinsky wrote songs with lyrics in English, French and Spanish. Then, one day, she heard the music of Lisbon-based, Cape Verdean descended singer-songwriter Sara Tavares. “It felt like listening to my own blood and bones,” reflects Dubinsky. “It makes you want to dance, and I love the melodies, the message. I’ve learned over time how intentional Sara is about her excellence. It’s not an accident, it's not magic. She composes, rehearses and performs with a focus that I also admire and have learned from.”

Tavares’s sound whetted Dubinsky’s longing to know more about the Lisbon scene, particularly  the Cape Verdean and Angolan music happening in the city. Through her extended artist community, trips to places like Cape Verde, and a lot of hard work, she got to know several of the musicians Tavares works with regularly, some of the strongest and most creative players in Portugal. Three of them (Rolando Semedo, Miroca Paris, and Ivo Costa) appear on Soft Spot. “Living in Lisbon, you can’t help but hear semba, funana, coladeira, mourna, samba, bossa nova,” says Dubinsky. “It’s in the air, at least with the musicians I became close with.”

Though drinking from this well, she knew she had to forge her own path forward, absorbing what she could without losing sight of her own vision. “You have to be honest to learn. I don’t want to imitate people. I want to find my own sound, my own way,” Dubinsky muses. “I am not interested in getting out of who I am via ‘outside’ music, of being the American musician who works for a bit with this or that style, then moves on. These genres feel like part of my own nature, something I can grow and extend into.”

“She’s got a lot of different ideas, she’s got a lot going on, from all sorts of different cultures,” says guitarist Wesley Amorim. “It’s not this genre or that genre,” adds bassist Rolando Semedo. “It’s Eleanor’s music, plain and simple.”

The songs that resulted over several years of collaboration, rehearsing, and recording in New York and Lisbon keep the urbane bittersweetness of good New York jazz songwriting, thanks in part to pianist and writing partner Frank Ponzio’s soulful playing and elegant ballads. But there’s always a delicious twist, a small quirky rhythm in a guitar line (“Turn it Around”) or a savoring of percussive layers (“Cuando”) that speaks to Dubinsky’s engagement with her Lusophone musician friends.

Eleanor's key collaborators, Amorim, Semedo, Paris (percussion), Costa (drums) and Ponzio, inspired her in the rehearsal room, studio booth, and with the particular cultural context and musical experience they brought to the music. “A lot of music from the homelands of the musicians I work with is created to help people understand and grapple with their everyday lives and their complex histories. Musicians act as cultural interpreters and activists. That’s what I’d like to do.”

On multilingual tracks like “Cuando,” Dubinsky witnesses and transmits the homesickness and love she witnessed working side by side with migrants in service jobs; feelings and sacrifices that anyone working far from home may encounter. “You Are Special” is a loving call to those who have felt marginalized and intimidated by the fearful rhetoric and coarse tenor of America’s current national conversation.

Dubinsky calls for justice, consideration, and connection, but beginning and ending with our humanity. “People need solace. An artist’s process of unearthing emotions, of putting stuff out there and being vulnerable is a service. We often talk about what’s difficult to talk about,” says Dubinsky. “We put feelings out there, and that’s a risk, taken in a poetic way. It’s healing."

Tom Pryor wrote this as a testimonial:

Eleanor Dubinsky is prodigiously talented: a gifted multi-instrumentalist with a strong, clear voice and a knack for catchy, open-hearted, multilingual pop that invokes the likes of Maria Bethânia and Carole King. While Dubinsky’s recordings are well worth your time, you need to see her live to appreciate the full package. Her recent performance at NYC’s Joe Pub celebrated the release of her latest album, Soft Spot of My Heart , and it was a knockout. Dubinsky’s multilayered songs — inspired by jazz, soul, Latin, and afro-Atlantic influences — opened up and revealed themselves in performance. Songs like the gospel-inflected “Turn It Around” and “You Are Special, You Are Beautiful” are relentlessly positive, but leavened with enough emotional grit and musical muscle to stop cynics dead in their tracks. The result was a joyous, uplifting and deeply generous performance — to her musicians and the audience alike — that was just the tonic for the frayed nerves of many New Yorkers after another long winter in these parlous times. Go. See her. This is music as medicine for your soul.